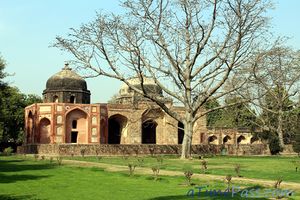 The Asfarwala Tomb was built by an officer in Akbar’s court in 1566. The tomb stands in the 'Asfarwala Complex', a large walled enclosure southwest of Humayn’s tomb in Delhi. It shares a platform with the small Asfarwala Mosque. Both are built in a simple, bold style, in red sandstone and white marble. The tomb is square in plan with beveled corners, topped by a dome.

Photos of Afsarwala’s Tomb and Mosque

Timing: Open Tesday to Sunday the week from 8:00 am to 6:00 pm
Entry Fee: INR. 25 for Indians and INR 250 for foreign tourists (As per ASI)
Photography: Allowed
Video camera: Allowed
Visit Duration: 1/2 hours approximately
Best time to visit: From September to March