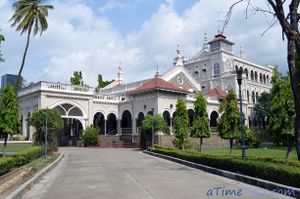 The Aga Khan Palace was built by Sultan Muhammed Shah Aga Khan III in Pune, India. Built in 1892, it is one of important landmarks in Indian history. The palace was an act of charity by the Sultan who wanted to help the poor in the neighbouring areas of Pune, who were drastically hit by famine.

Aga Khan Palace is a majestic building. The palace is closely linked to the Indian freedom movement as it served as a prison for Mahatma Gandhi, his wife Kasturba Gandhi, his secretary Mahadev Desai and Sarojini Naidu. It is also the place where Kasturba Gandhi and Mahadev Desai died. In 2003, Archaeological Survey of India (ASI) declared the place as a monument of national importance.

Historically, the palace holds great significance. Mahatma Gandhi, his wife Kasturba Gandhi and his secretary Mahadev Desai were interned in the palace from 9 August 1942 to 6 May 1944, following the launch of Quit India Movement. Kasturba Gandhi and Mahadev Desai died during their captivity period in the palace and have their Samadhis located over there. Mahatma Gandhi and Kasturba Gandhi have their memorials located in the same complex, near Mula river. Legend goes that the Sultan built the palace to provide employment to the famine – struck villagers of the surrounding region; so he employed 1000 people, and the palace was constructed in five years. It was built in Rs 12 lakhs. The total area is 13 acres and built up palace covers seven acres, and the rest is a well maintained garden.

In 1969, Aga Khan Palace was donated to the Indian people by Aga Khan IV as a mark of respect to Gandhi and his philosophy. Today the palace houses a memorial on Gandhi where his ashes were kept. The then prime minister Indira Gandhi had visited the place in 1974 where she allotted a sum of ₹200,000 (US$2,800) every year, for its maintenance. The amount rose to ₹1 million (US$14,000) till the 1990s, after which the national monument of India, was neglected for many years due to improper allocation of funds. There was a protest held at the statue of Mahatma Gandhi near Pune railway station in July 1999 to protest against the worsening condition of the monument. The present condition has improved very little. While the visitors take a round the palace, the rooms at the backside can be seen filled with old, broken furniture and garbage. There are rooms on first floor too, which are certainly in worst conditions hence kept away locked from visitors. This condition highlights how badly the yearly funds are managed or how corruption can impact to such an otherwise beautiful and important monument.

Timing: Open Tesday to Sunday the week from 8:00 am to 6:00 pm
Entry Fee: INR. 25 for Indians and INR 250 for foreign tourists (As per ASI)
Photography: Allowed
Video camera: Allowed
Visit Duration: 2.5 hours approximately
Best time to visit: From September to March