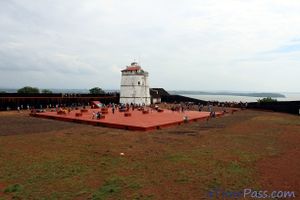 The fort was built over three years from 1609 to 1612 to guard against the Dutch and the Marathas. It was a reference point for the vessels coming from Europe at that time. This old Portuguese fort stands on the beach south of Candolim, at the shore of the Mandovi River.

A freshwater spring within the fort provided water supply to the ships that used to stop by. This is how the fort got its name: Aguada which meaning watery in the Portuguese language. Crews of passing ships would often visit to replenish their freshwater stores. On the fort stands a four-story Portuguese lighthouse, erected in 1864 and the oldest of its kind in Asia. It has the capacity of storing 2,376,000 gallons of water, one of the biggest freshwater storages of the time in whole of Asia. This fort is divided in two segments: the upper part acted as fort and watering station, while the lower part served as a safe berth for Portuguese ships. Whereas the upper part has a moat, underground water storage chamber, gunpowder room, lighthouse, and bastions, it also has a secret escape passage to use during time of war and emergency. The lighthouse at the initial stage is used to emit light once in 7 minutes. 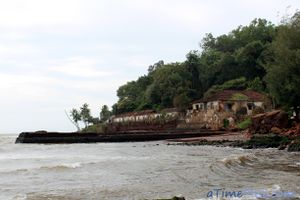 The Fort Aguada was converted into a jail during the Salazar administration, some say to house his political opponents. Beginning in 1946, dozen of peaceful protestors demanding that Goa be handed back to India, found themselves imprisoned here.

Although the jail itself is naturally closed to the general public, there is a rather magnificent statue just outside the gates of the prison area which commemorates the freedom struggle of Goa. 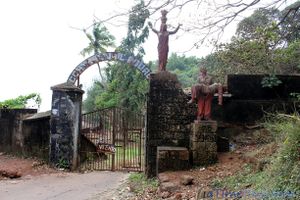 The statue depicts the figures of a man and a woman, the man cradling a child and the woman with her arms raised, breaking the chains which bind her. Behind them is the Ashoka pillar, the national emblem of India, with a plaque dedicated to the remembrance of all those who gave their lives in the struggle for freedom.

On the 18th of June every year, a ceremony is held here in remembrance of freedom endlessly sought after, tirelessly fought for and hard won.

Timing: From 9.30am to 6.00pm all days of the week
Entry Fee: NR. 25 for Indians and INR 70 for foreign tourists (As per ASI)
Photography: Allowed
Video camera: Allowed
Visit Duration: About 2 hours
Best time to visit: From November to February
Aguada Fort photos