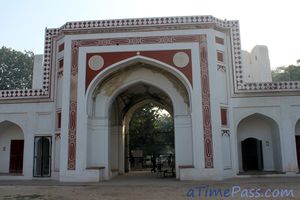 The eastern gateway of the Arab Serai Complex is part of the 16th century walled enclosure erected to accommodate the craftsmen engaged for the construction of Humayun’s Tomb. The grand gateway stands within the UNESCO designated World Heritage Site. The eastern gateway is highly ornamental with detailed tile work and medallions bearing Quranic inscriptions. The spandrels of the rectangular framing of the entrance arch are decorated with marble medallions and carvings in Persian which suggest that the bazaar gateway was built during Mughal emperor Jahangir’s period. Conservation works carried out here will ensure the long term preservation of the monument by restoring missing elements where traces of the original still exist. The bazzar is mostly ruined, though remnants of a step well can be seen a few meters to the west of the gateway.

According to S.A.A. Naqvi, Mughal emperor Humayun's widow Haji Begum built this serai in c. 1560/61 to shelter three hundred Arab mullahs whom she was taking with her during her hajj to Mecca; however, Y.D. Sharma opines that the word Arab in the title is a misnomer as this building was built for the Persian craftsmen and workers who built the Humayun's Tomb.

In January 2017, the Aga Khan Trust for Culture started a project to conserve the serai. The restoration was completed in November 2018. In March 2019, the trust announced a planned project to conserve the baoli (stepwell) of the serai with the help of funds from the embassy of Germany. This building along with other buildings form the UNESCO World Heritage Site of Humayun's Tomb complex.