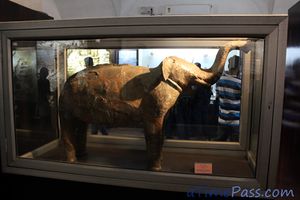 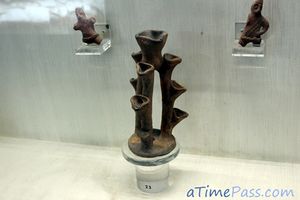 The Archaeological site museum at Purana Qila is located inside the fort and to the right of the main entrance. The building in which the museum is housed is a part of the inner walls of the fort. Original plaster decoration can still be seen, particularly on the vaulted ceiling. The exhibits tell the history of Delhi, as revealed in excavations in the Purana Qila and elsewhere in Delhi. Inside there are artifacts unearthed during excavation — pottery, figurines, glassware, tiles, Chinese porcelain, etc. Here one can learn about the history of the city through its material culture down the ages and also about the history of excavation work in the area.

The excavations at Purana Qila were carried out by the Archaeological Survey of India in 1955 and again from 1969 to 1973. The exhibits in this museum are largely based on the excavated materials. These excavations have revealed evidence of earliest settlement at this site datable to around 1000 BC, represented by Painted Grey ware and with a continuous cultural sequence from Mauryan to Mughal through Sunga, Kushana, Gupta, Rajput and Sultanate periods.