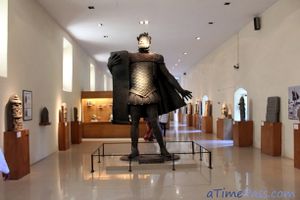 Archaeological Museum(set up in 1964), Velha Goa, is situated in the convent adjacent to the church of St. Francis of Assisi in Old Goa. Old Goa also known as Velha Goa was the former capital of the Portuguese rule.Its treasures are divided amongst eight galleries. The most important of these are considered to be the portraits of the long-dead Viceroys and Governors of Goa. 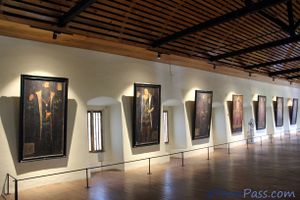 The vast gallery on the first floor are displayed with huge portrait paintings of the Portuguese Governors and Viceroys of Goa, originally from residential mansions and the Old Secretariat building at Panaji. They were shifted to the museum in 1962. A complete list of them (1505-1961) can be seen on the western wall, above, the wooden staircase.

Items on display are included as part of eight galleries, comprising the Portuguese rule in Goa, and also the pre-historic and early historic periods of Goan history. The late Medieval period is well covered. There are also portraits of Governors and Viceroys of colonial Goa.

Besides this, there are postage stamps, wooden sculptures, pillars and other objects. Artificial and natural lighting is used for the display. The larger-than-life statue of the Portuguese epic poet Luis Vaz de Camoes is particularly noteworthy. There are also hero stones, sati stones, Persian and Arabic inscriptions, Portuguese weapons (rifles, swords, daggers). Video shows are available to visitors, and there is a publication sale-counter.