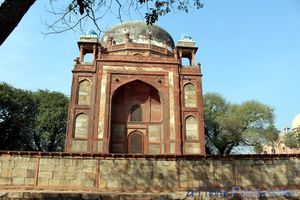 It is located towards the south-east corner, within the Char Bagh, lies a tomb known as Nai-ka-Gumbad, or Barber’s Tomb, belonging to royal barber, it is datable to 1590-91 CE, through an inscription found inside. Its proximity to the main tomb and the fact that it is the only other structure within the main tomb complex suggests its importance, however there are no inscriptions suggesting as to who is interred therein, the name Barbers tomb is the local name of the structure, hence still in use. 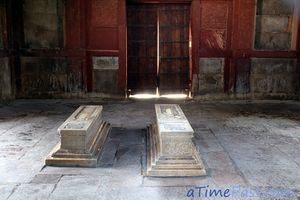 The tomb stands on a raised platform, reached by seven steps from the south, it has a square plan and consists of a single compartment covered with a double-dome. Inside lie two graves each inscribed with verses from the Quran. Also, one of the graves is inscribed with the figure 999 which may stand for the Hijra year 1590-91. However in an 1820 watercolour now at British Library, the Persian caption beneath the structure reads, Maqbarah-i-Kokah i.e. “Tomb of Kaka”, and Kokah or Kaka in Persian stand for foster-brother (mirak brother), Mirak(a Persian title as sir) though the identity of the person remains unknown, and it might be (incorrectly) referring to another nearby monument in the Chausath Khamba complex, the tomb Ataga Khan, the foster brother of Humayun, which lies in Nizamuddin West area and not to the east of the Humayun’s tomb.