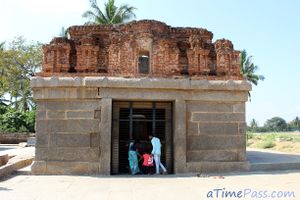 Badavilinga Temple is a wonderful temple in Hampi dedicated to Lord Shiva. The Hindu deity Shiva is worshipped in the form of a Linga in this temple. The Badavilinga temple is located near the Lakshmi Narasimha Temple. Tourists as well as devotees flock to the temple throughout the year. 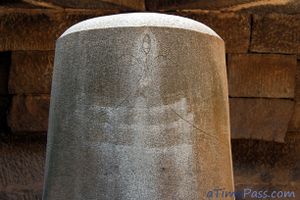 The beautiful Linga is made of black stone. It has a height of 3 meters. It is believed that the temple has been in existence since the period of the Vijayanagara Empire. Devotees come here from far and near to worship the Shiva Linga.

The name Badavilinga is a combination of two words – Badva and Linga. In the local language Badva means poor and Linga represents Shiva. Legend has it that the Shiva Linga placed inside the temple was commissioned by a poverty-stricken peasant woman. Hence the temple came to be known as Badavilinga Temple. 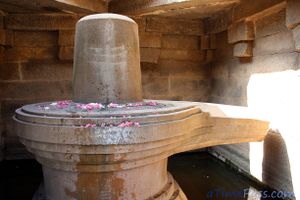 The huge Shiva Linga of the Badavilinga Temple is situated inside a small stone chamber. There is a single opening in front of the chamber through which devotees can get in. An interesting thing to note about the design of the stone chamber is that it has no ceiling. During the day time, sunlight enters through the opening in the ceiling and floods the Shiva Linga with light.

According to devotees, the base of the Shiva Lingam is submerged in water as it depicts the arrival of the holy river Ganges on earth and its flow is controlled by Lord Shiva.

The Badavilinga Temple is a shrine that has not escaped the destruction that had befallen Hampi several centuries ago. However, the good part is that the Shiva Linga stands intact even today. The inner walls of the shrine, surrounding the Shiva Linga, have also escaped any severe damage.

Though the temple is a small and simple structure, it is a fascinating place to visit and have a look at the large Shiva Linga.

How to reach Badavilinga Temple

The location of Badavilinga Temple(near Lakshmi Narasimha statue), based on the southern side of the Hemakuta group of temples, is a well-known spot in Hampi and is easily accessible from all parts of the ruined town.