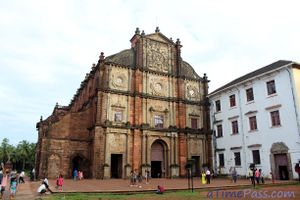 The Basilica of Bom Jesus is a Roman Catholic basilica located in Goa, India(former capital of Portuguese India). It holds the mortal remains of St. Francis Xavier and has been christened as World Heritage Monument by UNESCO.

'Bom Jesus' (literally, 'Good (or Holy) Jesus') is the name used for the Ecce Homo in the countries of Portuguese colonization. The Jesuit church is India's first minor basilica, and is considered to be one of the best examples of baroque architecture and Portuguese Colonial architecture in India. It is one of the Seven Wonders of Portuguese Origin in the World. 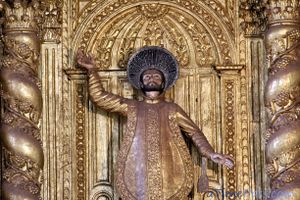 The Basilica of Bom Jesus is a monument typical of the classic forms of plane architecture, introduced by the Society of Jesus, otherwise known as the Jesuits. The façade, which is of granite, represents features of five styles of architecture: Roman, Ionic, Doric, Corinthian and Composite. It is a large single Nave structure built ( 1595-1605) and paid for with legacies left by Dom Jeronimo Mascarenhas, a wealthy Portuguese Captain of Cochin.

It is the only monument with a façade not covered with plaster. The plaster was stripped off in 1970 by an over-zealous Portuguese conservationist who believed that this would help preserve the carvings on the façade better. Unfortunately, even though this was soon seen to be a false assumption, no one has put the plaster back.