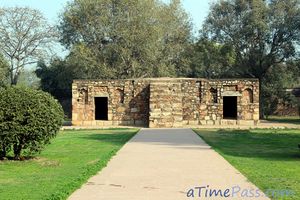 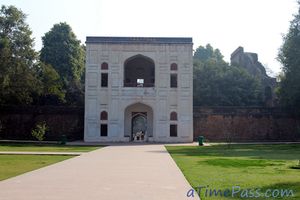 Bu Halima’s Tomb and Garden are situated on the western side of the Humayun Tomb Complex. The entrance gateway from the western end of the Humayun Tomb Complex greets you with the Garden of Bu Halima. Detailed facts about Bu Halima is unknown, however, she must have important place in Humayun’s harem and was a part of Babur’s (Humayun’s father) entourage to India. The exact identity of Bu Halima is a mystery but it’s said that she was Humayun’s wet nurse and also a Mughal noble woman. In fact, Bu Halima’s Tomb does not sit at the centre of this garden which is not a common feature as many Garden Tombs are seen with the main Tomb constructed at the heart of a Garden with pathways and waterways surrounding the main structure. This could only mean that it was a later addition constructed within this garden complex.

Bu Halima’s Tomb is seen with traces of coloured tiles that still exist on its entrance which faces the Tomb of Humayun. It is made of sandstone set with plasterwork that adds to the beauty of the structure. The architecture of this structure dates back to the early Mughal period. The tomb, rectangular in shape, seems to have been built with brightly coloured stones which appear to have faded over time. Each of the four sides has two entrances carved out in them.

This Gateway let to the tomb garden of Bu Halima, of whom not much is known. The facade of the gateway is chamfered, and remnants of tile-work can still be seen. Ornate domed canopied surmount the two northern bastions of the garden wall. The western wall of the garden was breached in the 19th century to allow access to visitors.