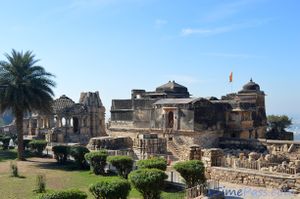 The Chittor Fort or Chittorgarh is one of the largest forts in India. It is a UNESCO World Heritage Site. The fort was the capital of Mewar and is today situated in the Chittorgarh town. It sprawls over a hill 180 m (590.6 ft) in height spread over an area of 280 ha (691.9 acres) above the plains of the valley drained by the Berach River. The fort precinct has several historical palaces, gates, temples and two prominent commemoration towers. These monumental ruins have inspired the imagination of tourists and writers for centuries. 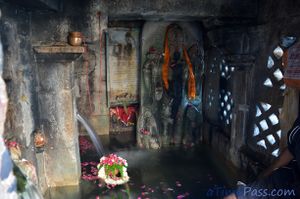 From 7th century, the fort was ruled by the Mewar Kingdom. It was attacked three times by Muslim rulers: In 1303 Allauddin Khilji defeated Rana Ratan Singh, in 1535 Bahadur Shah, the Sultan of Gujarat defeated Bikramjeet Singh and in 1567 Akbar defeated Maharana Udai Singh II who left the fort and founded Udaipur. Each time the men fought bravely rushing out of the fort walls charging the enemy but lost every time. Following these defeats, the women are said to have committed Jauhar or mass self-immolation. Thus, the fort represents the quintessence of tribute to the nationalism, courage, medieval chivalry and sacrifice exhibited by the Mewar rulers of Sisodia and their kinsmen and women and children, between the 7th and 16th centuries. The rulers, their soldiers, the women folk of royalty and the commoners considered death as a better option than dishonor in the face of surrender to the foreign invading armies. 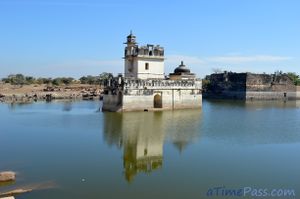 Chittorgarh (garh means fort) was originally called Chitrakut. It is said to have been built by the local Maurya rulers (not to be confused with the imperial Mauryans). According to one legend, the name of the fort is derived from its builder Chitranga. Another folk legend attributes the construction of fort to the legendary hero Bhima: it states that Bhima struck the ground here, which resulted in water springing up to form a large reservoir. The water body allegedly formed by Bhima is an artificial tank called Bhimlat kund. Several small Buddhist stupas dated to 9th century based on the script were found at the edge of Jaimal Patta lake.

The Guhila (Gahlot) ruler Bappa Rawal is said to have captured the fort in either 728 CE or 734 CE. One account states that he received the fort in dowry. According to other versions of the legend, Bappa Rawal captured the fort either from the mlechchhas or the Moris. Historian R. C. Majumdar theorizes that the Moris (Mauryas) were ruling at Chittor when the Arabs (mlechchhas) invaded north-western India around 725 CE.The Arabs defeated the Moris, and in turn, were defeated by a confederacy that included Bappa Rawal. R. V. Somani theorized that Bappa Rawal was a part of the army of Nagabhata I. Some historians doubt the historicity of this legend, arguing that the Guhilas did not control Chittor before the reign of the later ruler Allata.