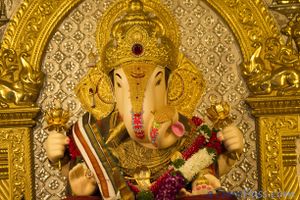 Dagadusheth Halwai (Dagadusheth Gadve) was a Lingayat trader and Sweet maker (Halwai in Marathi). He originally came from Ausa, District Latur, Maharashtra and settled in Pune. After he gained fame as a Halwai, that became his surname. His original Halwai shop still exists under the name Kaka Halwai near Datta Mandir in Pune.

Mr. Dagdusheth Halwai was a successful sweetmeat seller and a rich businessman. In late 1800s, he lost his son in a plague epidemic. This caused Dagdusheth and his wife to go into deep depression. To heal themselves, their Guru, Shri Madhavnath Maharaj recommended building a Ganesh temple. This was completed in 1893.

Lokmanya Tilak, the Indian Nationalist leader and a contemporary of Dagdusheth, was a close friend of him. Tilak saw his dedication and also the construction of the temple and it was here that the idea of celebrating public Ganesh festival struck him. It proved to be an epoch making event in Indian history.