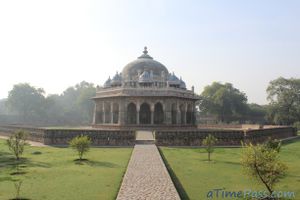 Isa Khan Niyazi was a noble in the court of Sher Shah Sur. This enclosure includes his tomb and a mosque, both built during his own lifetime. Isa khan Niazi was born in 1453 and his last brother was born in 1478. He died in Delhi in 1548 at the age of 95. The time of 1451 – 1525 was the golden period for these khans. It was the time when Lodhis completely dominated the subcontinent (Hindustan). Isa Khan Niazi was a prominent member among the ruling family. He was in the same tribal unit of nobles as Ibrahim Lodhi, Sher Shah Suri. Most of these families were attached with the Delhi sultanate. There, a contention arose between Isa Khan Niazi and Sher Shah Suri which ended in mutiny. The octagonal tomb, pre-dating Humayun’s Tomb by only 20 years, has striking ornamentation in the form of canopies, glazed tiles, and lattice screens. Along the western side of the enclosure, the three-bay-wide mosque has a grand red sandstone central bay and striking mihrabs. Until the early 20th century, an entire village had been settled in the enclosure.