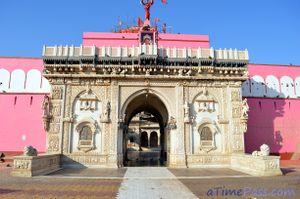 Karni Mata Temple is a Hindu temple dedicated to Karni Mata at Deshnoke, 30 km from Bikaner, in Rajasthan, India. It is also known as the Temple of Rats. The temple is famous for the approximately 20,000 black rats that live, and are revered in, the temple. These holy rats are called kabbas, and many people travel great distances to pay their respects. The temple draws visitors from across the country for blessings, as well as curious tourists from around the world.

The temple is opened to the public early in the morning at 04:00. Charan priests perform Mangla-Ki-Aarti and offer bhog (special food) in worship. Devotees make offerings to the rats, which roam about the temple in large numbers and are considered auspicious. There are two kinds of offerings made: the ‘dwar-bhent’ is attributed to the priests and the workers, while the ‘kalash-bhent’ is utilised for the temple maintenance and development.