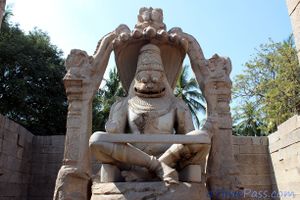 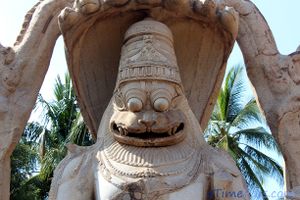 The original sculpture had a small figure of Goddess Lakshmi, consort of Narasimha, sitting on his lap. The gigantic statue was vandalized and mutilated in 1565 A.D. during the raid by the Mughals that led to the fall of the Vijayanagara Empire.

The limbs of Narasimha’s statue were broken during the attack. The figure of Lakshmi was separated from that of Narasimha. In the process of destruction, one of the hands of Goddess Lakshmi was broken and even today the broken hand of the Goddess can be seen resting on the back of Narasimha.

Now the damaged statue of Lakshmi resides at the Archaeological Museum at Kamalapura.

The Lakshmi Narasimha statue at Hampi is a brilliant work of architecture. It is a rare statue with a huge size and was crafted with great details. The statue has a height of 6.7 metres.

The statue of Narasimha has a finely chiselled broad chest and a well-defined mane. Narasimha is adorned with a beautiful headgear and is seen seated in a cross-legged position. The sculpture portrays Narasimha sitting on the coils of Adishesha, the king of all snakes, which rises behind him with its seven hoods.

The hoods have been beautifully designed to serve as a canopy over Narasimha’s head. The sculpture is set within a Makara torana or arch. There is a lion-mask set above the hoods of Adishesha. All these features make the statue an interesting piece of architecture.

The unique feature of the statue is the bulging eyes of Narasimha. The large round protruding eyes provides the statue with an exceptional look. Though the statue of Lakshmi is no longer sitting on the lap of Narasimha, one can imagine the beauty of the complete statue in its original undamaged form.

According to Hindu mythology, Narasimha is the fourth incarnation of Vishnu and appeared on earth in the form of half human (nara) and half lion (simha). Narasimha is believed to have the face and claws of a lion, and torso and lower body of a human.

There are two theories, one of which suggests that the statue represents the Ugra Narasimha (fierce Narasimha) form. The reason stated is that the statue has a fierce appearance, expressed through the protruding eyes and the scary facial expression. The absence of Goddess Lakshmi beside the God also added to the relevance of this theory.

The other theory suggests that the statue represents the Malola Narasimha form. The reason stated is that in this statue Narasimha is seen with his consort Goddess Lakshmi sitting on his lap (though the figure is now damaged). Malola is a combination of two words – Ma meaning Goddess Lakshmi and Lola meaning beloved.

How to reach Lakshmi Narasimha Statue

The location of Lakshmi Narasimha statue, based on the southern side of the Hemakuta group of temples, is a well-known spot in Hampi and is easily accessible from all parts of the ruined town.