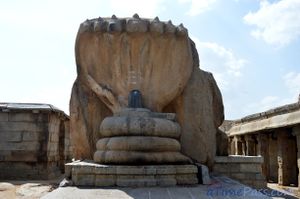 Lepakshi is a village in the Anantapur District of Andhra Pradesh, India. It is located 15 km east of Hindupur and approximately 120 km north of Bangalore. Lepakshi is also famous for puppet show based on Hindu mythology.

"Le pakshi said Lord Rama to Jatayu, the bird asking it to get up" says the guide a bit dramatically narrating the episode from Ramayana ."Ravana had chopped off its wings and Lord Rama found the bird fallen right here in this village." Thats why its called Lepakshi. There are more stories,” his voice trails off. 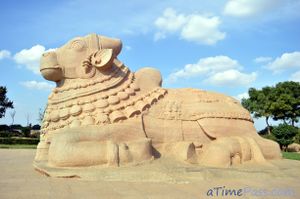 Lepakshi is culturally and archaeologically significant as it is the location of shrines dedicated to Shiva, Vishnu and Veerabhadra which were built during the Vijayanagara Kings' period (1336–1646). The temples are the location of mural paintings of the Vijayanagara kings and Kannada inscriptions. Near the temple complex is a large granite Nandi bull.

There is also a three-headed bull with single body carved on the pillar of main entrance pillar.