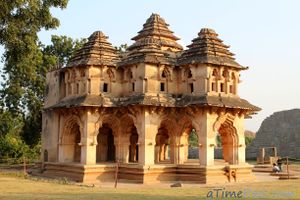 The Lotus Mahal is one of the fine architectural designed palaces that are uniquely identified by its lotus look like structure. This glorious building is within the Zenana Enclosure, a segregated area that is used by the royal women of Vijayanagara Dynasty.

The Lotus Mahal is otherwise called the Kamal Mahal or Chitragani Mahal. It's remarkable and unmistakable design is the main highlight of the palace. It is one of only a handful few astonishing building in Hampi that had not been damaged or destroyed amid the attack on the city.

Architecture of the Lotus Mahal 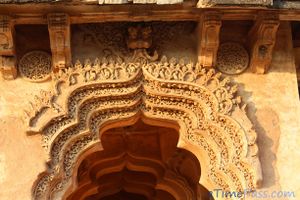 As the name given to the palace is because of the shape it resembles. The balcony and the passages covered with a dome that looks like an opened lotus bud. The central dome is also carved as a lotus bud. The curves of the palace are given an Islamic touch while the multi-layered roof design is moreover related to Indo style of buildings. The style and designs is an inquisitive blend of Islamic and Indian way of architecture.

The palace is a two-storied building, well-structured symmetrically. It is surrounded by a rectangular wall and four towers. These towers are also in pyramidal shape giving a lotus-like structure visual. Around 24 pillars are present to support the arched windows and balcony of the palace. The walls and pillars are carved beautifully with patterns like sea creatures and birds.

The surrounding area of the palace is covered with many shady trees providing a cool ambiance to the palace. At the point when the Lotus Mahal is lit up during the evening, visitors witness a fantastic view. It is a standout venue in entire Hampi to take photographs.

The Lotus Mahal was a part of Zenana enclosure, a place where royal families of Vijayanagara Empire resided. Lotus Mahal designed as a palace for royal ladies of those times to mingle around and enjoy recreational activities. The Mahal also served as a meeting point for the king and his ministers. This place is also referred to as a council chamber in the maps found in

It is said that the Queen of Krishna Deva Raya used to spend her most of the time seeking pleasure and peace in the palace. The palace also served as a meeting point for the king and his ministers. Kaml Mahl is also referred to as a council chamber in the maps found in 18th century.

Timing: Open on all days of the week from 8:00 am to 6:00 pm
Entry Fee: INR. 25 for Indians and INR 250 for foreign tourists (As per ASI)
Photography: Allowed
Video camera: Allowed
Visit Duration: 1/2 hours approximately
Best time to visit: From November to February