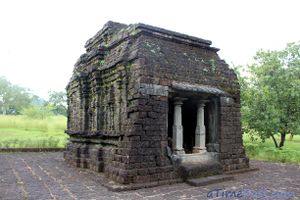 This is a transplanted temple. Originally located 17 km south-east of the present location, in Kurdi Angod on the banks of river Salaulem. The contruction of a dam across Salaulem had threatened the submergence of the temple, hence it was systematically dismantled and reconstructed at this § place providing similar topographical setting. It consisted of a square garbhagriha and a porch in-front with extant super structure built of both laterite and basalt stone. The main object of worship was a Siva Linga, presently under worship in Someswara temple at Kurdi Angod. 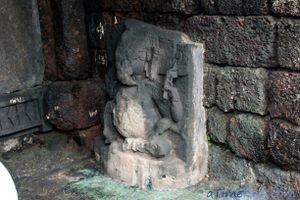 The entrance of garbhaghiha had three dwara sakha type with Ganesha at Lalatabimba. The architrave above the lintel carved into five niches, separated by pilasters, contain a seated female figure at the centre flanked by unidentifiable mutilated figures. A couple of femail devotees on either side of the door jamb, kirthimukhas on the threshold and Chandrashila with Sankavartha adorn the entrance of garbhagriha. The porch was raised by tho pillars comprising square at thr base, fluted shaft with petal design having square shaped capital, decoreted with Krthimkhas.

The moulded adhistana portion of the temple consists of upapita, adhistana, janga and pattika, while the wall portion display a central badra flanked by Kuta and Nagara Sikhara motif separated by linear pilasters carefully delineated on laterites blocks brought an aesthetic look on the mad seal temple enabling to designate dravidian in order and assignable to 10th - 11th century ad of Kadamba period. 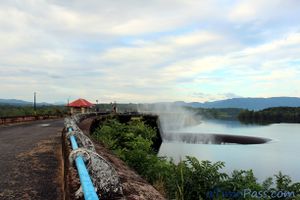