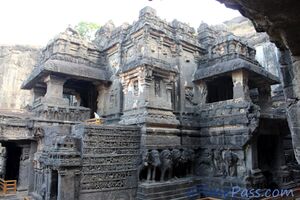 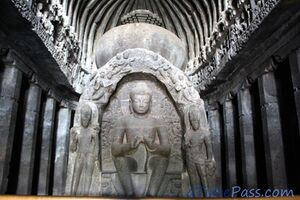 We wake up early in the morning, so that we are able to do prathama darshan and attend the first Aarti of the day in Grishneswar Mahadev Jyotirling Temple. Its quit a cold morning but with a soothing breeze we all grab our shawls and jackets and reach temple in 5 min.Temple premises was neat and clean, we bought some flowers and fruit from entrance shops, there was no crowd but entrance queue-in system was common as in other historical temples, but we reach Garbha Grah within 2 min from the entrance of temple, it’s mandatory for men to remove upper cloth before entering in Grabh Grah and women should be in indian attire, there were about 20 people present at 05:30 AM for morning Aarti.The Jyotirling and the Goddess, Grishneshwari, both are seen in inside the Garbha gruham. Lot of art work can be seen on the walls. After Aarti we paid for Abhishek pooja and pandit helped in completing that pooja with chantings. Its individuals wish to go with normal darshan and pooja or paid pooja. Grishneswar is the 12th Jyotirling among the total 12 Dwadasha Jyotirlingas. The temple is situated at a place called Ilapur. The temple is just 2Kms away from world famous Ellora caves. The village name is Verul. It was a pleasant experience about darshan of a jyotirling, we came out of the temple near about 0630 AM and saw crowd start coming. We saw an old God Ganesha temple at the entrance of Shiva Temple which we missed at the time of entering. 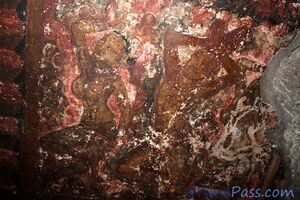 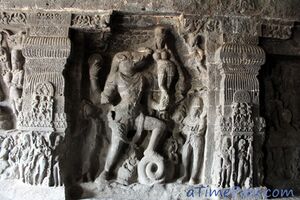 We returned to the hotel and Had breakfast and proceeded towards the Ellora Caves. Ellora cave is just 200m away from our Hotel.At entrance we buy tickets from counter we took a wheelchair for my mother which is free we just submitted one ID Card but we paid for the helper only ,Helper guided us upto some important caves though parents got tired because it took almost 4 hours for covering few temples as per wheelchair helper. Ellora is a UNESCO World Heritage Site located in the Aurangabad district of Maharashtra, India. It is one of the largest rock-cut monastery-temple cave complexes in the world, featuring Hindu, Buddhist and Jain monuments, and artwork, dating from the 600–1000 CE period. Cave 16, in particular, features the largest single monolithic rock excavation in the world, the Kailasha temple, a chariot shaped monument dedicated to Lord Shiva. The Kailasha temple’s art work and featured sculptures depicting the gods, goddesses and mythologies found in Vaishnavism, Shaktism as well as relief panels summarizing the two major Hindu Epics Vishnu Puran and Shiv Puran .There are over 100 caves at the site, all excavated from the basalt cliffs in the Charanandri Hills, 34 of which are open to public. These consist of 12 Buddhist (caves 1–12), 17 Hindu (caves 13–29) and 5 Jain (caves 30–34) caves, each group representing deities and mythologies.though jain caves are nearby 2km away from kailash temple and bus facility is available for make tourist easy to visit there so, we boarded at bus and picked wheelchair with us so,that mom can also get to see beauty of jain temple too .water coolers are available in every point and fruit sellers also makes our hot day visit easy in Ellora.Time and duration of buses are fixed for tourists to visit jain temple in between those caves there are many caves and a river too the way to reach toward those caves is not for tourists or they may be not safe structures are almost some kind of demolished type.but must say Great and appreciable art work ,and techniques had being used in that time to cut a cliff into beautiful structures. After gathering memorable experience we came back towards exit gate of the heritage site campus ,we all are hungry and it's about 1400 hrs in clock so we entered in a government restaurant kailash which was at entrance point of ellora caves and ordered some local food and with proper hygiene hotel staff served us the food within few minutes ,quality and quantity wise food was remarkable and too delicious,we decided to have next day morning breakfast there only .

Parents went back to the hotel and we spent some more time in the Ellora Caves.