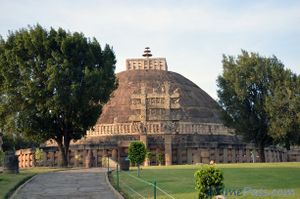 Sanchi is the center of a region with a number of stupas, all within a few miles of Sanchi, including Satdhara (9 km to the W of Sanchi, 40 stupas, the Relics of Sariputra and Mahamoggallana, now enshrined in the new Vihara, were unearthed there), Bhojpur (also called Morel Khurd, a fortified hilltop with 60 stupas) and Andher (respectively 11 km and 17 km SE of Sanchi), as well as Sonari (10 km SW of Sanchi). Further south, about 100 km away, is Saru Maru. Bharhut is 300 km to the northeast. 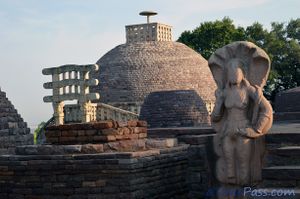 The “Great Stupa” (or “Stupa No1”) at Sanchi is the oldest structure and was originally commissioned by the emperor Ashoka the Great of the Maurya Empire in the 3rd century BCE. Its nucleus was a hemispherical brick structure built over the relics of the Buddha, with a raised terrace encompassing its base, and a railing and stone umbrella on the summit, the chatra, a parasol-like structure symbolizing high rank. The original Stupa only had about half the diameter of today’s stupa, which is the result of enlargement by the Sungas. It was covered in brick, in contrast to the stones that now cover it. 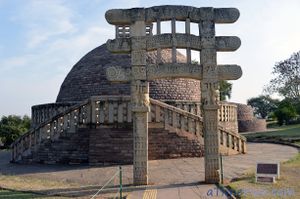 According to one version of the Mahavamsa, the Buddhist chronicle of Sri Lanka, Ashoka was closely connected to the region of Sanchi. When he was heir-apparent and was journeying as Viceroy to Ujjain, he is said to have halted at Vidisha (10 kilometers from Sanchi), and there married the daughter of a local banker. She was called Devi and later gave Ashoka two sons, Ujjeniya and Mahendra, and a daughter Sanghamitta. After Ashoka’s accession, Mahendra headed a Buddhist mission, sent probably under the auspices of the Emperor, to Sri Lanka, and that before setting out to the island he visited his mother at Chetiyagiri near Vidisa, thought to be Sanchi. He was lodged there in a sumptuous vihdra or monastery, which she herself is said to have had erected.