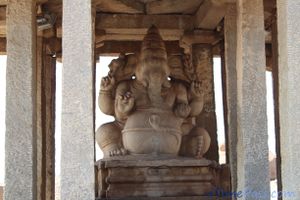 According to the Hindu mythology, Lord Ganesha is known for his love for food. Once Ganesha consumed a lot of food, due to which his stomach was on the verge of bursting. Finding no other option to stop his stomach from exploding, Ganesha caught hold of a snake and tied it around his stomach in order to prevent it from bursting open. This is the mythological incidence behind the existence of the snake tied around the Ganesha’s stomach, which is visible on the statue.

The inscription on the statue is as old as 1500 AD and says that this statue was erected in memory of the king Narasimha II, of the Vijayanagar Empire. This temple and the statue is indeed one of the finest specimens of Indian sculptures.

The Ganesha is seen in a half-lotus position with four arms. The right and left hand at the upper side holds a goad and a broken tusk. The top right hand of the statue holds a sweet (modak) the left hand is portrayed with a noose. A large mandapa is covering the statue at the top with a rough wall covering pillars around it. The archaeology department has installed a huge sitemap consisting of whereabouts of the place and history of the statue.

How to Reach Sasivekalu Ganesha Temple

Sasivekalu Ganesha Temple is situated in the town of Hampi. Any local transport in the city can be used to reach the temple. You can reach Hampi by any of the following conveyance.