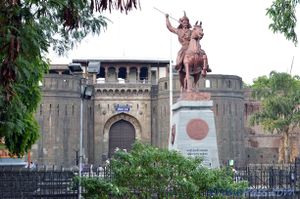 Shaniwarwada (Śanivāravāḍā) is a historical fortification in the city of Pune in Maharashtra, India. Built in 1732, it was the seat of the Peshwas of the Maratha Empire until 1818, when the Peshwas lost control to the British East India Company after the Third Anglo-Maratha War. Following the rise of the Maratha Empire, the palace became the center of Indian politics in the 18th century.

The fort itself was largely destroyed in 1828 by an unexplained fire, but the surviving structures are now maintained as a tourist site. 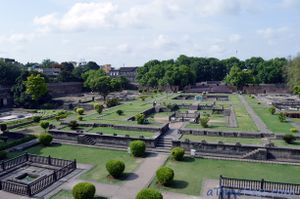 The Shaniwar Wada was originally the seven-storied capital building of the Peshwas of the Maratha Empire. It was supposed to be made entirely of stone but after the completion of the base floor or the first story, the people of Satara (the national capital) complained to the Shahu(King) saying that a stone monument can be sanctioned and built only by the Shahu(King) himself and not the Peshwas. Following this, an official letter was written to the Peshwas stating that the remaining building had to be made of brick and not stone. The Wada was then completed and upon being attacked by the British Artillery 90 years later, all the top six stories collapsed leaving only the stone base, which was immune to the British artillery. Hence only the stone base of the Shaniwar Wada remains and can be seen even today in the older parts of Pune. 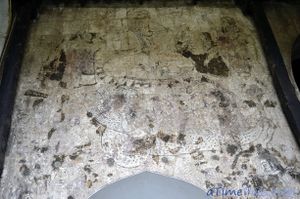 Peshwa Baji Rao I, prime minister to Chattrapati Shahu, laid the ceremonial foundation of his own residence on Saturday, January 10, 1730. It was named Shaniwarwada from the Marathi words Shaniwar (Saturday) and Wada (a general term for any residence complex). Teak was imported from the jungles of Junnar, stone was brought from the nearby quarries of Chinchwad, and Lime (mineral) was brought from the lime-belts of Jejuri. Shaniwarwada was completed in 1732, at a total cost of Rs. 16,110, a very large sum at the time.

The opening ceremony was performed according to Hindu religious customs, on January 22, 1732, another Saturday chosen for being a particularly auspicious day.

Later the Peshwas made several additions, including the fortification walls, with bastions and gates; court halls and other buildings; fountains and reservoirs. Currently, the perimeter fortification wall has five gateways and nine bastion towers, enclosing a garden complex with the foundations of the original buildings. It is situated near the Mula-Mutha River, in Kasba Peth.