Shinde Chhatri (Marathi : शिंदे छत्री), located in Wanwadi, in Pune, India, is a memorial dedicated to the 18th century military leader Mahadji Shinde who served as the commander-in-chief of the Maratha army under the Peshwas from 1760 to 1780. It is one of the most significant landmarks in the city and is reminiscent of the Maratha rule. It is a hall that marks the spot of Mahadji Shinde’s cremation on 12 February 1794. 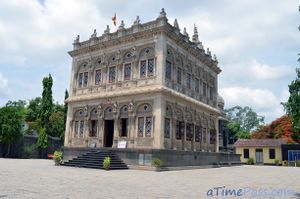 In 1794, the complex of the memorial only had a temple, dedicated to Lord Shiva, which was built by Mahadji Shinde himself. He died the same year and his last rites were performed in the premises.

In 1965, a samadhi (memorial) was constructed outside the sanctum of the Shiva temple, in memory of Mahadji Shinde, exactly where he was cremated. Madhavrao Shinde was responsible for the building of the complex, along with the memorial of Mahadji Shinde.

The Scindia of Gwalior are the descendants of Daulat_Rao_Sindhia, adopted son of Mahadji Shinde. It is maintained by Shinde Devasthan Trust, Gwalior.