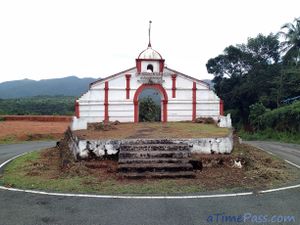 The Shri Mallikarjuna temple (constructed during the middle of the 16th century) dedicated to Lord Mallikarjun, an incarnation of Lord Shiva is situated in the Sristhal village in the South Goa district of Goa, India. The shrine is known to be one of the oldest in Goa and is situated amidst beautiful natural surroundings in a valley completely surrounded by mountains. It was refurbished in the year 1778. The main deity of the temple is referred to as Advat Sinhasanadheeshwara Mahapati by his devotees. 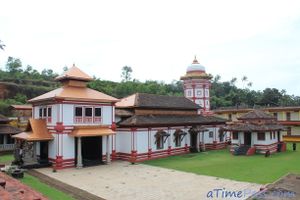 There are about 14 Mallikarjuna shrines spread over Goa. The striking similarity in these shrines is that all idols are in phallic shape and covered with metallic masks accompanied by Trishula. These phallic shaped wooden idols are known as Nirakar(formless) by the local population. These idols probably point to the era when Natha Sampradaya was prominent in the Western Deccan region. The lingas are believed to be Swaymbhu lingas.

The temple has around 60 Hindu deities and it celebrates a number of festivals with the annual jatra being the most unusual amongst most of the festivals in Goa. The temple also celebrates the festivals of Rathasaptami and Shigmotsav which are main attraction of devotees. 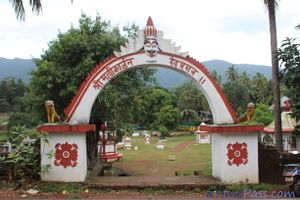 Legend has it that the location of the temple was the place where Lord Shiva united with his consort Parvati after a long period of separation. Another source[2] mentions that the demon Malla was fighting with one of the Pandava brothers, Arjuna. Shiva assumed the form of a hunter and killed Malla and saved Arjuna and hence the name ‘Mallikarjun'. The temple is also known as Adavat Sinhasanadhishwar Mahapati Canacona among the locals.

The Linga is believed to be Swayambhu lingam, uncovered by a member of the Kunbi community while clearing the forest and it is a phallic shaped uncut stone covered with a metallic mask.