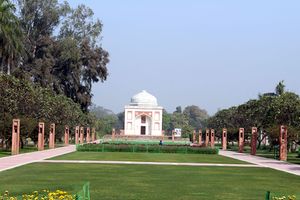 Sunder Nursery is a 16th-century heritage garden complex adjacent to the Humayun’s Tomb, a UNESCO World Heritage site in Delhi. Originally known as Azim Bagh, it lies on the Mughal-era Grand Trunk Road, and is currently spread over 100 acres. The garden was originally built by the Mughals in the 16th century. Today it contains nine heritage monuments, including ASI-protected Sundarwala Burj, Sundarwala Mahal and Lakkarwala Burj. During the British rule, nursery was established to grow experimental plants, which gave it its current name, though much of the original garden was thus lost.