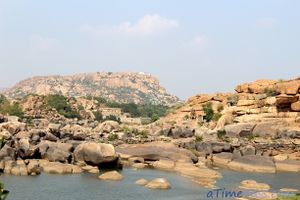 Tungabhadra is in fact formed by the union of two rivers Tunga and Bhadra and hence the name. Both Tunga & Bhadra Rivers are originated on the eastern slops of the Western Ghats. Tungabhadra flows in a more or less northwest direction before joining the eastern river Krishna. The Krishna River finally ends into the Bay of Bengal.

The Vijayanagara kings took advantage of the river by constructing a host of irrigation canals and aqueducts. A highly networked water supply system fed the manmade water bodies in the urban core of the palace area. Many of the ancient canals are still in use to irrigate the surrounding agriculture fields. 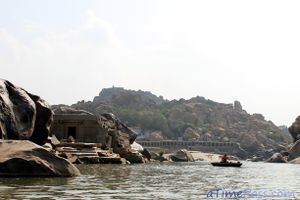 The ancient name of the river was Pampa. According to the legends, Pampa, the daughter of Brahma (the God of creation) did penance to please Lord Shiva. Impressed by her devotion Shiva married her and taken the name Pampapati (means husband of Pampa). The name Hampi has origin in Pampa. On the banks if the river, there are numerous shrines and idols associated with the worship of Lord Shiva. 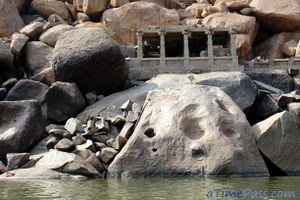 Piles of granite in varying shades of grey, ochre and pink dominate the landscape. The river has cut through weaker rocky substrata of the Hampi landscape and created a narrow gorge where granite hills confine the river in a deep ravine.

In this setting the ruins of Vijayanagara and Hampi, the seat of power of the Vijayanagar empire, overlook this holy river, creating a mythological landscape merging sacred traditions about a multitude of significant divinities.

Photos of Tungabhadra River Near Hampi