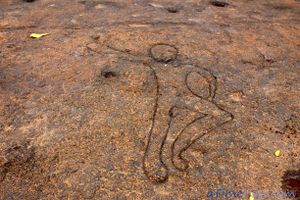 Usgalimal rock carvings/engravings or Usgalimal Petroglyphs, in South Goa, is one of the most important prehistoric sites.

It is situated on the banks of river Kushavati, these carvings/engravings exhibit earliest traces of human settlement in India. These rock art are approximately 20,000 to 30,000 years old and belong to the Upper Paleolithic or Mesolithic eras more commonly known as “the Stone Age”. More than 100 distinct figures, spread an area of 500 sqm., including images of bulls, labyrinths and human figures are carved on laterite stones.

The site was discovered in 1993, when local villagers took the archaeologists to the bend in west-flowing river Kushavati outside the village, with mysterious engravings of Labyrinth on the rock. The layer of mud covering up the engravings had been washed away by monsoon floods facilitating their discovery. Subsequently, when the soil was cleared more engravings were found.

The carvings are known as 'Petroglyphs', because they were created by chipping away the outer surface of the rock using a tool of some sort. They pre-date the rock paintings that have been previously discovered in other parts of India are very different from them.