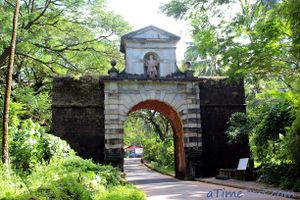 The Viceroy’s arch in Old Goa was built in the memory of Vasco Da Gama in 1597, by his great-grand son Francisco da Gama after he became the viceroy. There was a ceremonial importance attached to this structure during the Portuguese rule. Every governor who took charge of Goa had to pass through the arch.

The arch is built using red laterite stone. On its entrance, is a statue of Vasco Da Gama wearing full regalia, gazing at the Mandovi River. He was the first European to sail around the ‘Cape of Good Hope’ to reach India.

Above this niche was another tier of the arch that contained a bronze statue of St. Catherine in its niche. This aspect was not included in the 1954 restoration of the arch, after its collapse in 1948. This explains its absence now.

Inscription inside the archway describes the reasons for building it. Another decorated slab commemorates Portugal’s independence under its King from Spain in 1640. The inscription on it after translation reads, ‘The legitimate and true King, Dom Joao IV, restorer of Portuguese liberty.

On the rear side of the arch is a statue of a lady. She is wearing a crown and long decorated robe. She holds a sword in one hand and an open book in another, gazing sternly ahead. Under her feet is a reclining figure of a man in equally decorated and flowing robe, slippers and turban, this confirms he is of a high rank. The head of this man is propped up by an elbow with a resigned expression on his face. It is considered to have a symbolic value to it.