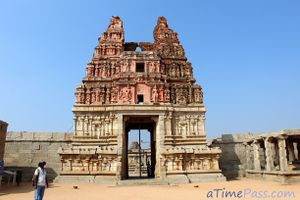 The Vittala Temple or Vitthala Temple in Hampi is an ancient monument that is well known for its architecture and craftsmanship. It is considered to be one of the largest and the most famous structure in Hampi. The temple is located in the north eastern part of Hampi, near the banks of the Tungabhadra River.

The temple has amazing stone structures such as the incomparable stone chariot and the musical pillars. 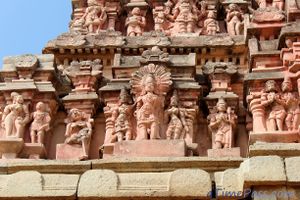 The Vittala Temple is also known as Shri Vijaya Vitthala Temple. It is dedicated to Lord Vitthal,(Lord Vishnu). An idol of Vitthala-Vishnu was enshrined in the temple. Legend has it that the temple was built as an abode for Lord Vishnu in his Vitthala form. However, the Lord had found the temple to be too grand for his use and had returned to live in his own humble home. 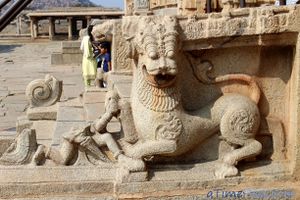 The Vittala Temple is presumed to be the grandest of all temples and monuments in Hampi. The temple exemplifies the immense creativity and architectural excellence possessed by the sculptors and artisans of the Vijayanagara era.

The Vittala temple is built in the Dravidian style of architecture. It has traits and features that are characteristic of typical south Indian temple architecture.

It is believed that the main shrine of the temple originally had one enclosed Mantapa. An open Mantapa was added to it in the year 1554 A.D.

The temple complex is a sprawling area that is surrounded by high compound walls and three towering gateways. The temple complex has many halls, shrines and pavilions located inside it. Each of these structures is made of stone and each structure is a beauty in itself.

The Vittala Temple is regarded as the most ornate of the Vijayanagara temples. 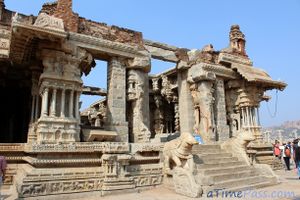 The Maha Mantapa or main hall of the Vittala Temple is situated in the inner courtyard of the temple complex. It is a structure of immense beauty and is situated on a highly ornate base. The base is decorated with carvings of warriors, horses, swans and several other ornamental designs.

The Maha Mantapa comprises of four smaller halls. The steps on the eastern side of the Maha Mantapa are decorated with elephant balustrade. There are forty pillars lining the facade of the temple. Each of these pillars has a height of 10 feet. 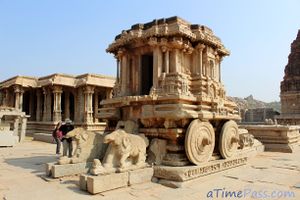 The Vittala Temple Complex has the richly sculpted Stone Chariot, which is considered to be the most stunning architecture of the Vijayanagara kingdom. The Stone Chariot or Ratha stands in the courtyard of temple. It is one of the three famous stone chariots in India. The other two chariots are situated in Konark (Odissa) and Mahabalipuram (Tamil Nadu).

The Stone Chariot of Vittala Temple is actually a shrine that has been designed in the shape of an ornamental chariot. The shrine is dedicated to Garuda and had an image of Garuda enshrined into the sanctum. As per Hindu mythology, Garuda is the carrier of Lord Vishnu.

The Musical Pillars of the Ranga Mantapa 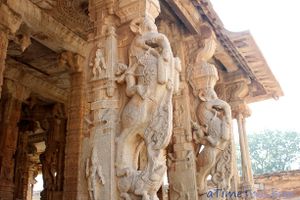 Pillars of the Ranga Mantapa

There are a set of main pillars and several sets of minor pillars inside the Mantapa. Each main pillar provides support to the ceiling of the Ranga Mantapa. The main pillars are designed as musical instruments.

Every main pillar is surrounded by 7 minor pillars. These 7 pillars emit 7 different musical notes from the representative musical instruments. The notes emanating from these pillars vary in sound quality depending on whether the instrument is a percussion, string or wind instrument. 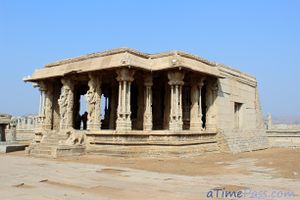 Interesting Facts about the Musical Pillars of Vittala Temple, Hampi The cluster of musical pillars inside the Vittala Temple complex was carved out of huge single pieces of resonant stone.

The emission of musical notes from stone pillars was a mystery that fascinated many people down the centuries.

Even the British rulers of India were wonderstruck and wanted to discover the secret behind the musical pillars. To satisfy their curiosity and to unravel the mystery behind the amazing pillars they cut two of the musical pillars of Vittala Temple to check whether anything existed inside the stone pillars that resulted in the emission of musical notes. However, they found nothing inside the pillars.

The two pillars cut by the British rulers still exist inside the temple complex and can be seen by visitors even today.

How to reach Vittala Temple

The Vittala Temple in Hampi is situated at the end of the ruined Vittala Bazaar. There are two routes to reach the temple. One is from by Electric Van and the other hiking near the Nandi or Monolithic Bull situated at the eastern corner of Hampi Bazaar.

The first one is the easier and the more convenient one.